Meaning of the name Bethulie 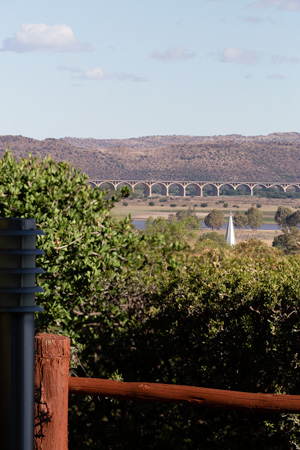 The name Bethulie was derived from the French word Bethulia, which means “Chosen by God” .

History of Bethulie
In 1829 a Mission Station was established by the London Missionary Society for the local people, the San Bushmen, It was originally known as Groot Moordenaars Poort (Murderers Pass) after a very vicious clash between the Sotho and Griqua tribes.

It was founded in 1832 by the missionary Jean Pellissier, whose home is the oldest pioneer building north of the Orange River. It now houses a historical museum displaying items of the past and information on the life and trial of Jean Pellissier and Chief Lephoi and his people.

Until 1833 Bethulie was known as Caledon (after the nearby Caledon River). This name was in conflict with a Western Cape town bearing the same name. Then in 1833 a French Missionary Society, the “Paris Missionary Society” took over control of the area and renamed the mission station Bethulia, meaning “Chosen by God .

In 1835 it was renamed – Verheullpolis

In 1872 the town was again renamed back to Bethulie after the original mission station.

Our town must hold the record for changing its name more than any town in South Africa if not the entire world.

The original mission building is still located in Bethulie. It is one of the oldest remaining dwellings built by European settlers. It was built by the Rev. Jean-Pierre Pellissier, the first French missionary to be stationed here, and is currently home to the Pellissier House Museum.

During the Anglo-Boer War (1899 to 1902) the largest concentration camp erected by the British was also situated in Bethulie.

Historical Sites
Concentration Camp: This site is a sad commemoration of what was one of the largest of the camps used by the British in the Anglo-Boer War. (1899 to 1902). As there was a possibility that the area where the Original Concentration Camp Area was located would be flooded as a result of the construction of Lake Gariep, a decision was taken to exhume, move and re-bury 1 737 people to the present graveyard location, 3 km from town – the original two monuments can still be seen..

The DH Steyn Bridge is a beautiful bridge near the town, spanning the Orange River at Bethulie, connecting the Free State with the Eastern Cape. It is a combined road and rail bridge, and the longest in the country (1,2 km).

Dutch Reformed Church is a stately edifice, completed in 1887 – now a national monument.

Grave of JJ Venter: Former acting President of the Free State Republic (1863); he also helped with the founding of the Gereformeerde Kerk (Reformed Church) in the Free State.

Graves of Pellissier Family (of whom five (5) children were buried there), are in the grounds of the Pellissier House Museum. The Rev Jean Pellissier (who died in Bethulie in 1867), was the first French missionary stationed in the town.

Louw Wepener monument: Wepener, who led the Free State commandos in the second Basotho war, is honoured by this memorial which was erected on his farm Constantia, 10 km north of the town on the Springfontein Road (R715). Wepener was killed while storming the Basotho mountain stronghold of Thaba Bosiu. Monument in honour of the Horse: Loura Rautenbach was the sculptor of this fine monument. It is situated on entering Bethulie from Springfontein/Gariep Dam entrance, and commemorates the role of the horse in the history of SA.

Ox-Wagon Monument depicting an oxwagen with oxen, was made from molten metal of discarded cartridge casings, commemorating the 1938 re-enactment of the Great Trek. After the oxen were stolen in the nineties, the oxwagen was moved to the Pellisier Museum across the street where it can be viewed.

Pellisier House Museum The museum which is at 1 Voortrekker Street, is housed in the original mission station buildings and depicts the history of the area, including an exhibition on the Anglo-Boer War and concentration camp. Built in 1834-1835 by C Gosseling, craftsman of the French Mission Society as residence for the Reverend Jean P Pellisier, a French missionary of the Paris Mission Organisation. One of the oldest settler-built buildings north of the Gariep.